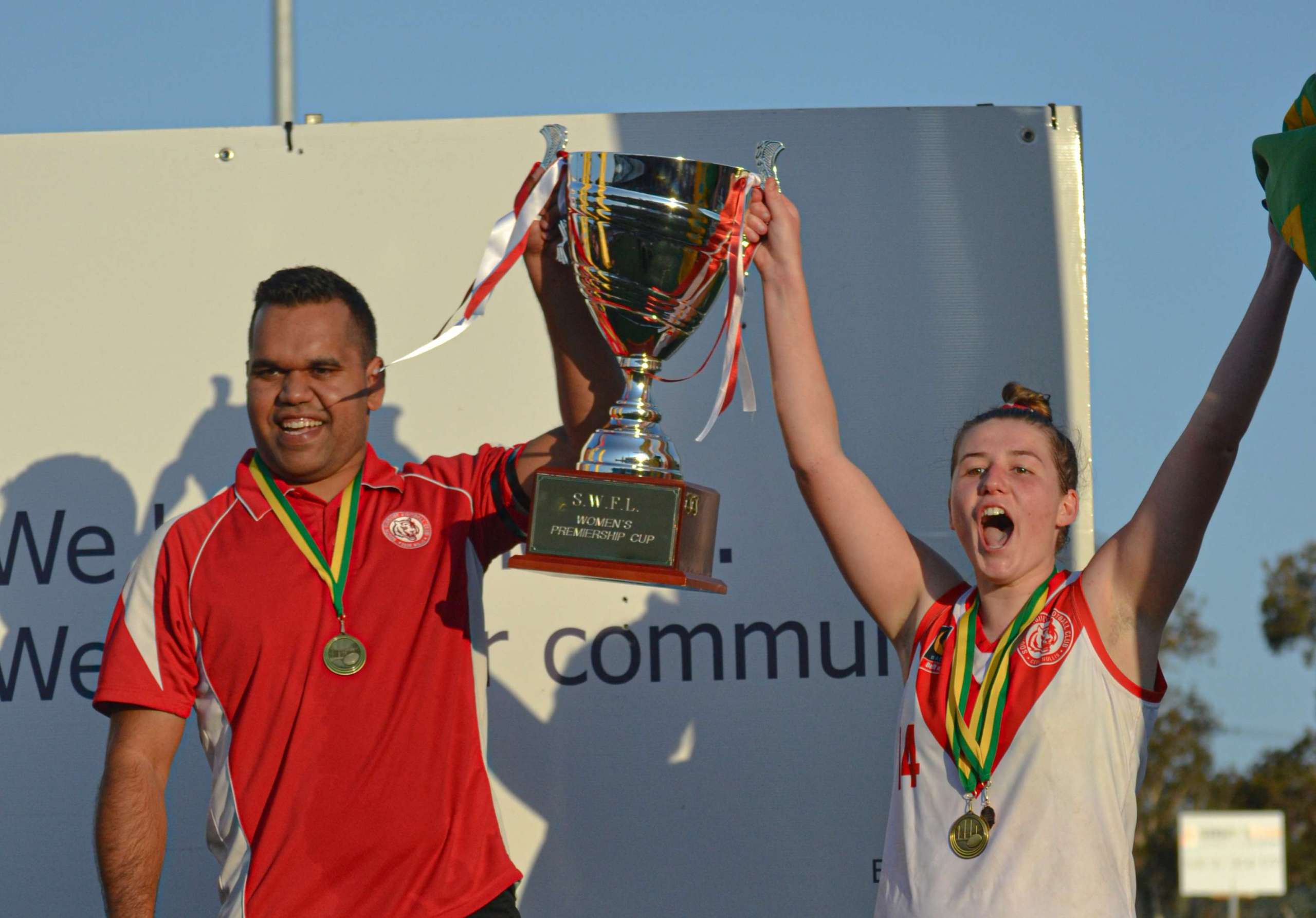 South Bunbury completed a perfect season in the SWFL women’s competition after toppling Bunbury 5.6 (36) to 3.4 (22) in Sunday’s grand final at Hands Oval.

After weathering intense pressure from the Bulldogs during the opening term, Maxwell Jetta’s side gradually took control and ensured an unforgettable end to an undefeated season.

The Bulldogs entered the clash minus influential ruck Cian Parsons, who suffered a season-ending knee injury in the preliminary final the week before.

Despite this apparent shortcoming, the visitors started the game brilliantly, subjecting the Tigers to a fierce physical bombardment.

Ruby Mahony had the ball on a string during the early stages, while the experience of Kristy Larsen and Trisha Lake was also telling.

The Tigers were wasteful early in front of goal, before the visitors opened up their account through a trademark goal from Casara Hill.

Hill, who has spent the majority of the season with Peel Thunder in the WAFLW, had been relatively quiet by her lofty standards over the past month, however her finish showed she has not lost a thing.

With a tumbling kick hitting the turf 40m out from goal, Hill cleverly scooped up the football, evaded two defenders and tore into goal with an emphatic finish.

Sensing their chance, the Bulldogs added another four minutes later, with Emily Lindsay capping off a quality transition move, which had the Tigers on the ropes.

The contest reverted into a defensive stalemate for much of the second quarter, which given the scoreline, suited the Dogs.

Larsen, Hill and Mahony were all proving to be a handful for the Tigers, while Ebony Bilcich was seemingly at the bottom of every pack.

Grand finals are often known for heroic moments and this encounter was not any different, with Amber Boyd etching her name in SWFL history.

Boyd burst to life in the forward line, booting two goals in 90 seconds, in one of the more remarkable purple patches you are ever likely to see.

In the blink of an eye, the Tigers were in front on the cusp of half time and suddenly it was the Bulldogs who needed to respond.

Bunbury’s hopes of a premiership three-peat dwindled further after the opening minute of the third quarter, when Megan Bain kicked truly after taking a towering mark 25m out from goal on a slight angle.

With Souths’ ruck Kate Fielding now firmly exploiting Parsons’ absence from the centre square, the Bulldogs found it extremely difficult to sustain possession in their own half of the ground.

When Claudia Elward goaled, the Tigers were up by a game-high 16 points and seemingly on course for their first flag.

Throwing caution to the wind in the closing stages, Bunbury launched one final tilt, however they were routinely denied by Tigers defensive lynchpin Kiarni Stevens, who took countless saving marks on the last line of defence.

On the final siren, Tigers players and supporters streamed out into the middle of Hands Oval, with the moment ushering in a new dynasty within women’s football.